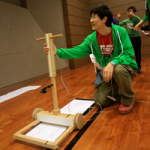 Graduated from Keio University, Graduate School of Media and Governance. After working as a media art teacher and researcher at the Institute of Advanced Media Arts and Sciences (IAMAS), he decided to go freelance. His work brought together print media and film media as seen in his animation version of Jim Woodring’s comic Frank. He is currently involved with the research and development of stop-motion animation software Koma Koma and workshops, the subject of his research being the qualitative research of the experience created by animation. He is a member of the board of the Japan Animation Association and the Japan Society for Animation Studies.

Established in 2000 by students in IAMAS (International Academy of Media Arts and Sciences) in Gifu prefecture. They have been producing  many I/O devices and workshops. Since 2003 they have organized lots of animation workshops in various parts of the country and developed devices for making animation with Taruto Fuyama.

KOMA KOMA LAB is a research project developing stop motion animation softwares and hardwares with the idea of “bringing animation and education together”.